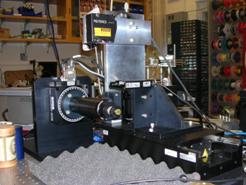 Using methods derived from our work on instrumentation for particle physics we have investigated the problem of audio reconstruction from mechanical recordings.  The idea was to acquire digital maps of the surface of the media, without contact, and then apply image analysis methods to recover the audio data and reduce noise.  This work has been described in two papers which have been published in the Journal of the Audio Engineering Society (J. Audio Eng. Soc., vol. 51, no. 12, pp.1172-1185 (2003 Dec.) (link), and J. Audio Eng. Soc., vol. 53, no.6, pp.485-508 (2005 June)) (link). The most recent status reports on this research, which contain many sound clips, were presented at various meetings and are available at the links indicated below.

Currently the research centers around two efforts. IRENE (top image above) is a scanning machine for disc records which images with microphotography in two dimensions (2D). It is under evaluation at the Library of Congress. For cylinder media, with vertical cut groove, and to obtain more detailed measurements of discs, a three dimensional (3D) scanner is under development (bottom image). I it is planned to begin evaluating this device at the Library of Congress in 2009.

In late 2007 and early 2008 we were involved in a project to restore the earliest sound recording in history. This was a “phonautograph” paper recording due to French inventor Edouard-Leon Scott de Martinville. This work is addressed in the most recent presentations below (Fermilab 10-8-2008 and Adobe 3-3-2009). For additional information see these links. 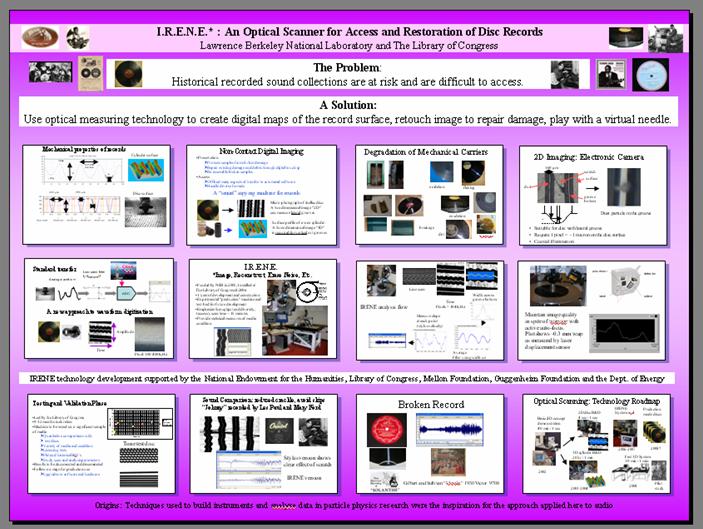 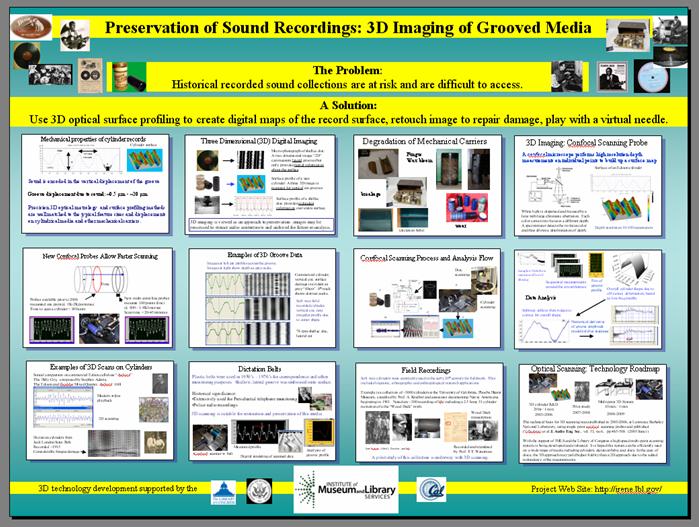 Topics in Preservation Science, presentation at the Library of Congress, Oct 4, 2010 PDF version of talk (137 MB)

Talk given at the Library of Congress of Research Scientists, July 25, 2008, PDF version of talk (72 MB)

Rather old stuff is below:

Below are presented various sound clips from early studies (2002-2004) of these methods as well as earlier presentations. In 2005 the National Endowement for the Humanities funded the development of a prototype scanning machine based upon this research. This machine, called IRENE, is currently under evaluation at the Library of Congress in and is described in the aforementioned presentations above (see in particular the June 2007 file).

The work described here represents experiments and studies designed to explore the potential of certain optical methods to reconstruct and preserve mechanical recordings and aid in the process of mass digitization. The sound clips presented should not be regarded as a definitive final result, only as a proof-of-principle demonstrations or test of these optical methods. No attempt was made to add any digital post processing, such as additional noise reduction, unless explicitly stated here.

Additional information can also be found in the presentations.

Same sound clip played from record with stylus and turntable

Same sound clip played from record with stylus and turntable

Third Clip (3D method): "Just Before the Battle, Mother", written by George F. Root, performed by Will Oakland and Chorus (1912), issued on an Edison Blue Amberol 4 minute celluloid cylinder. More information about this recording can be found here .

23-March-2005: Fourth Clip (2D method with dedicated hardware): "The Star Spangled Banner", performed by Kate Smith, issued on a shellac 78 rpm disc Victor 26198-B. This clip is presented also to illustrate the absence of modulation in the background noise as was heard on the earlier "Goodnight Irene" and "Nobody Knows the Trouble I've Seen" clips, identified as a resolution effect. .

PDF version of talk presented at the University of Toronto and University of Rochester, physics colloquia 21-22-Sept-2005, (33 MB)

Powerpoint (ppt) version of Library of Congress presentation 28-May-2004

Still photographs of the scanning system

This video is from 2005 and predates the construction of the full IRENE system described in the more recent presentations.

Sponsors of this research are the Library of Congress, The Institute of Museum and Library Services, The Mellon Foundation, The National Endowment for the Humanities, The National Archives and Records Administration, The John Simon Guggenheim Memorial Foundation, The University of California at Berkeley, and the US Department of Energy.