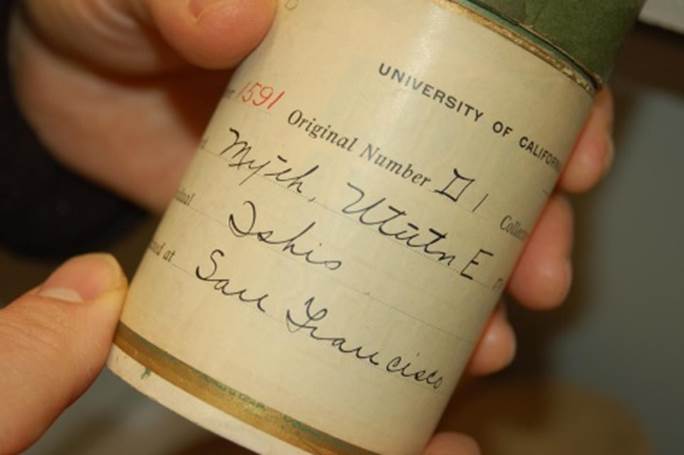 The image shows the container holding a wax cylinder recording collected by Prof. Alfred Kroeber and associates around 1912.

The purpose of this website is to provide examples and background information relevant to a proposed project to preserve and create access to the wax cylinder collection using non-contact optical scanning methods developed at Lawrence Berkeley National Laboratory (LBNL).

Audio recorded on cylinders in the collection were transferred to magnetic tape in 1975. This was an analog transfer process using whatever technology was available at that time. In fact little is known about the actual procedure used. A key aspect of the present proposal is to repeat this transfer process using modern optical methods which offer additional noise reduction and restoration.

Example 1 of cylinder from the collection.

Example 2 of cylinder from the collection

The focus of this study are wax cylinder records. Wax cylinders were in use from the late 1880's until the 1940's. In a wax cylinder the sound is recorded in a groove which undulates vertically in-and-out of the surface as the groove winds around the cylinder like a helix (or a spring shape). Typical cylinders are about 2 inches in diameter and 4 inches in length. The groove only moves up-and-down by no more that 10 or 20 microns. A micron = 1/1000 of a millimeter. A typical human hair is 50 microns in diameter.

The image below shows a magnified view of the groove structure on a cylinder. The area shown is about 0.75 millimeters on a side. The vertical dimension is exaggerated. The sound is stored in the depth variation of the "valleys"

The traditional way to transfer a sound recording is to use a physical stylus on the groove. In this process you must make physical contact to the material. This can cause further deterioration. If the recording is already damaged or compromised the result can be very distorted and further digital clean-up may be difficult. The image below is from a phonograph disc record, rather than a cylinder, but none-the-less illustrates the relative size of the stylus and the groove.

The optical process proposed for use here instead creates a very high resolution picture of the record. This picture is the ultimate preservation copy of the record. This picture can also be processed to identify the damaged or compromised regions and these can be removed from the image through a numerical algorithm. The optical methods used here can measure the surface with higher resolution than a physical stylus can. This additional resolution is fundamental to the noise reduction process.

Below is a "cartoon strip" which describes the optical process. At center top is an image of the optical scanner. The probe is called a "chromatic confocal microscope" and seen coming from the top left of the image. It works by dispersing white light into a range of colors which each focus at a different point. It can detect which color is in focus on the surface of the cylinder (blue cylinder here) and correlate that with the surface structure. The confocal principle is indicated in the picture with the lens at left. The data capture from the surface is represented by a series of profiles along lines parallel to the axis of the cylinder. These are taken sequentially as the cylinder rotates. These profiles are represented by the three images at top right. Up to 36000 such profiles might be acquired to cover the entire surface of the cylinder. The number of profiles corresponds to the frequency range which can be covered. All the profiles are then merged into a complete picture which is again represented by the little image at lower right. The total image is a few gigabytes in size and is saved as a preservation copy. The image, which is digital, is then processed by a computer algorithm to trace the grooves, optionally apply noise reduction and clean-up, and then converted to an audio file format, which is also save. 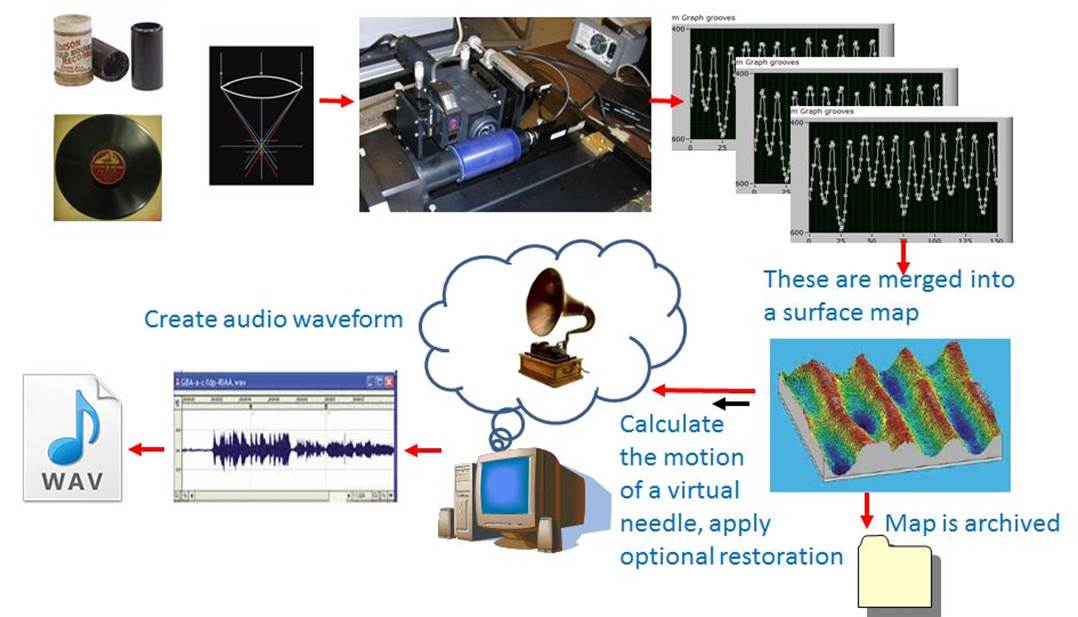 Noise reduction is an important part of this process. There are a variety of source of noise on wax cylinders. Examples of surface damage, biological and chemical and shown below. 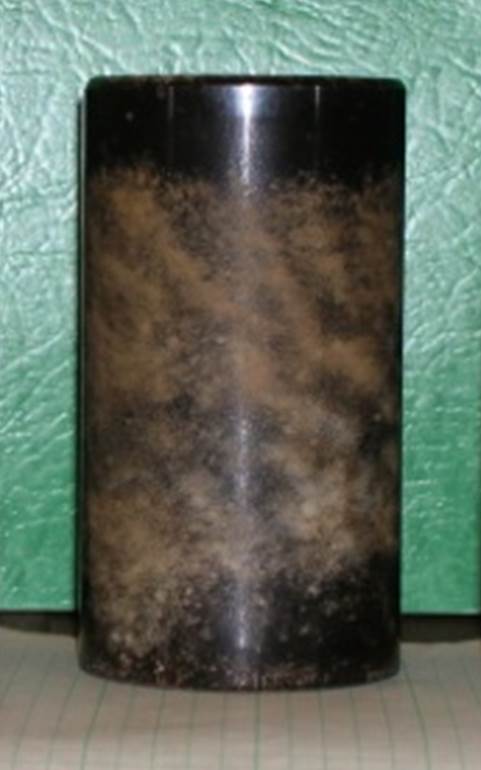 To understand the noise and the noise reduction better we refer to the images below. Both images shown a detail of the surface of cylinder acquired with the optical confocal probe. This is a depth image so the darker the spot, the deeper it is. The scales are different, the image at left is more zoomed in. The entire vertical distance from white-to-back is only about 10 microns (1/5 of a typical human hair).

The groove is the lines running up-and-down. The sound is represented by the varying depth. On the image at left the random dark structures are due to a mold which eats into the wax and destroys information. On the image at right the "fuzz" is damage to the surface due to cotton fibers from the storage container which stuck to the wax over time. Sometimes the damage can be very localized depending upon how the cylinder was stored. In both cases this damage leads to a distorted sound. The period "crunching" heard in the traditional playback examples 1 and 2 above are just this sort of effect.

Because we can resolve these damages so clearly in the images acquired we can also mitigate the effects. The damage sites can be isolated mathematically and "removed" from the image. In their place we can put a smooth transition from the nearby clean regions. We have not recovered lost information but we have facilitated a listening experience which can aid the scholar, researcher,? language student, or stakeholder who are trying to understand the content. The result of the noise reduction process can be heard again in the optical examples from 1 and 2 above.

These images show the effect of mold damage on wax cylinders. The grey values correspond to depth into the surface (black is deepest) For example the white spots on the image at right would be dust particles on the surface while the irregular dark filamentary structures are places where mold ate into the wax and destroyed information.

A critical aspect, and advantage, of optical scanning is sampling frequency and time resolution. This applies particularly to historic media such as wax cylinders. These early acoustic recordings do not contain deliberate audio above a few thousand Hertz (cycles per second). This limitation is due to the inability of the mechanical components to follow pressure variations in the air above those frequencies. Unlike a modern electronic microphone, which can capture sound to the very limits of human hearing, or beyond, the early acoustic systems were very limited in this regard. When these early recordings are replayed with a modern stylus playback system, the stylus size is determined by the geometry of the groove. Coincidently, this large stylus can trace most of the audio which is there, but cannot go beyond that. The optical system uses a much smaller "stylus" and consequently can reproduce signals far beyond the acoustic range, to a limit of around 100 KHz (thousand cycles per second).

The images below illustrate the relative limitations of the mechanical stylus (grey) as compared to the optical probe (orange). This distinction may seem irrelevant, since the deliberate audio is a lower frequency. It is important however because the sources of extra noise - damage, mold, scratches, etc - shown above in the images - contain higher frequency information. By resolving at high frequency we can use this information to achieve the noise reduction shown in the audio examples presented here.

This cartoon illustrates the relative frequency limitations. The "sine waves" represent a sequence of pitches. The light blue at top is near the limit of what the mechanical stylus can resolves without attenuation, a few thousand Hz. The green curve at the bottom is far in excess of what can be resolved mechanically. This is further illuminated below in the depth images for a variety of recorded pitches. The blue shape/yellow spot is meant to schematically indicate the size of a mechanical playback stylus. The optical probe “spot” is actually the pixel size in these images (which were acquired optically), and are too small to be seen by eye here.

To be even more quantitative, refer to the figure which shows the frequency distribution measured on the same cylinder with a modern stylus playback system (the Archeophone) and optical scanner playback. The difference above a few thousand Hz is dramatic.

You can also hear the difference. Note that the optical transfer actually contains more high frequency audio AND high frequency noise. This is a good thing because it facilitates effective restoration (against damage) and then a low pass filter can be applied afterwards, as an option.

Waveform (left) and frequency spectrum (right) compared on a cylinder recording between a modern mechanical playback system (stylus, dark blue) and the optical scanner (light blue). Note the higher frequency components are clearly seen in both the time and frequency domains.

An example of the effect of mold is shown in the figure below. This is a profile of the surface of a wax cylinder with mold damage. The curve shown matches the vertical red line in the image labeled "Mold Damage Image" on the left above. Notice the sharp features which are circled in the three ellipses. These correspond to places where there is damage to the surface due to mold and are seen in the images above as irregular black features. They are typically large effects and rise and fall very quickly in time. A stylus will be affected by these dramatically but cannot resolve their detailed structure. The optical probe, on the other hand, maps them quite accurately due to the inherently higher resolution and this leads to the ability to improved noise reduction which is shown in the examples from 1 and 2 above. Since we can identify these features so well we can also remove them and smooth over the missing regions (interpolation). 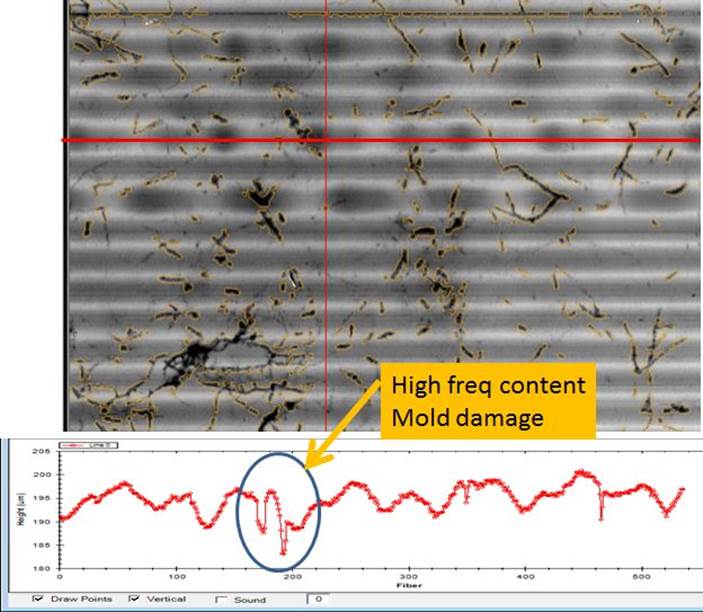 Other related examples of historic or distressed records include the following.