Optical scanning is a process to restore historic sound recordings, non-invasively.? The technology used here was developed mainly by a collaboration of Lawrence Berkeley National Laboratory and the Library of Congress.

The Smithsonian Institution National Museum of American History (SI NMAH) Volta Laboratory collection consists of early experimental sound recordings (1881-1886) created by Alexander Graham Bell, Charles Sumner Tainter, Chichester A. Bell, and associates.? In collaboration with the Smithsonian some of these recordings are being restored and presented to the public.? The present set includes Bell?s own voice.

In December of 2011 a first release of restored recordings from the SI NMAH Volta Laboratory collection was made.? See volta-release.html

?        This is the general website for the IRENE/3D optical scanning projects?? http://irene.lbl.gov/

?        This is a general report on the optical scanning development project Sound-Project-0311.pdf

?        Some simple details on optical scanning are given here

The files posted here are provisional. If referred to as FILTERED,? low pass filter has been applied.? The basic goal was clarity.

Smithsonian\Audio\Pages from Science 1888.pdf? This is a report in Science of a presentation made at the time concerning the Volta Lab research on sound recording.

Scholar Patrick Feaster has researched the collection and created a discography at the Smithsonian: ?A DISCOGRAPHY OF VOLTA LABORATORY RECORDINGS? AT THE NATIONAL MUSEUM OF AMERICAN HISTORY?

More information on the Volta Laboratory can be found on Wikipedia or by searching on the name.

This is a summary of the media studied so far.? There is clearly a large variation in the physical characteristics of the discs and the methods employed at the Volta Lab.

RPM are estimates. New records are highlighted in red.

This disc contains a direct recording of A.G. Bell?s voice, as documented in the notes stored with the artifact, and verbal statements.? The disc is extensively cracked and the wax appears to be delaminating from the binder board base.? There is also extensive particulates and debris in the grooves.? This disc is judged to be unplayable with a stylus method.

Top image is a detail of the disc showing the inscription ?Record made April 15, 1885 by A.G.B and C.A.B. to test reproduction of numbers?, (C.A.B. is Dr. Chichester A. Bell, chemist, member of the Volta Association and cousin of A.G. Bell).? Middle image is of the entire disc.? Bottom image is taken from the data collected by the confocal probe.? This image is a mapping of the circular disc to a rectangular format.? The dark lines from left to right are grooves.? This is a depth image where darker is deeper into the surface. The yellow line indicates the basic movement of a stylus, or the direction of time.? The vertical offsets correspond to the various cracks in the surface.? The horizontal line across the middle corresponds to the frame width of the confocal probe.? This image covers two frames and about 3.6 mm radially on the disc.

This disc is composed of foil on plaster of Paris, on a cardboard backing.? It appears to be an attempt, made in 1885?, to reproduce a recording made in 1881 by a molding process.? The original master also had a number of generations involving electrotyping as well.? The surface of this disc varies by 2 mm in height which is unusual.

? Documentation: THN 5:22-30, 34-36, 46-47. Content (transcribed at THN 5:29): T-r-r-r.??This record was first made in paraffin-wax by the voice; an electrotype in copper was then taken from it; and this iron phonogram from which the sounds are being reproduced was transferred from the copper electrotype. The original phonogram in the paraffin-wax was made on the twenty-ninth day of December eighteen hundred and eighty one. I am a magnetical Graphophone, what are you? To be, or not to be, that is the question. How is that for high?? T-r-r-r, etc. THN 5:47 reports that this electrotype negative was severely damaged in the process of dubbing it twice to an iron disc (possibly 287670*).

Profile measurement across grove from left-to-right. Groove depth about 0.25 millimeters

In this case the ?record? was an entire recording machine and the sound bearing media was integral to the assembly.? The unit was placed in the beam of the scanner and rotated by an external drive system.

? Date: Final recording made September 1881. Machine was in use for similar experiments throughout the preceding summer.

? Format: Edison phonograph with widened groove filled with wax and cut with a vertical recording.

? Inscription (in ink, on attached card): The following words and sounds are recorded upon the cylinder of this Graphophone: ?T-r-r?T-r-r?There are more things in heaven and earth Horatio, than are dreamed of in our philosophy?T-r-r?I am a Graphophone and my mother was a Phonograph. 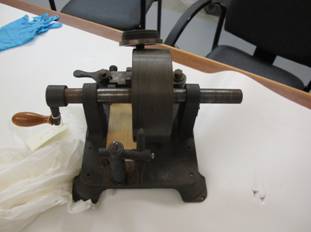 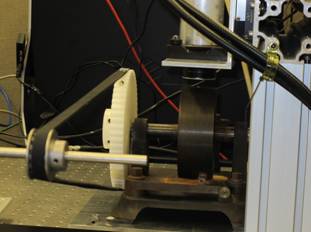 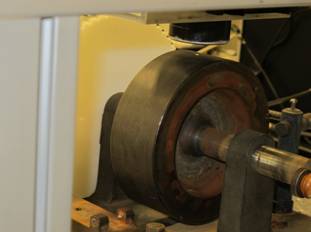 Left: View of machine.? Center: During scan at Berkeley Lab. Cylinder is rotated by plastic timing pulley. Right: Close-up under the confocal probe.


Below is a simplified explanation of the process used to non-invasively scan the artifacts from the Volta Laboratory collection.? Data is acquired optically so that delicate or damaged materials are protected.

Research supported by the Institute of Museum and Library Services, the Smithsonian Institution, and the Library of Congress.